Share a memory
Obituary & Services
Tribute Wall
Read more about the life story of John and share your memory.

John Robertson, Jr., died peacefully at his home in Upton on January 14, 2023, attended by his family and surrounded by the forests, waterways and wildlife he and his wife faithfully stewarded for 60 years.

He was born on March 24, 1928 in Norwood, MA, the son of John Robertson of Hawick, Scotland, and Helen (Metcalf) Robertson of Norwood, MA. He is survived by his wife of 68 years, Cynthia (Tourtellot) Robertson; his son, John Robertson of South Berwick, ME and his wife Nancy; his daughter Katherine Snow Robertson of Upton and her former partner Bronislaus Kush of Worcester; and his daughter Laurel Ruth Robertson and her husband, Brian Moriarty, also of Upton. His descendants include five grandchildren (Samuel, Thomas, Peter, Margaret and Callan) and three great-grandchildren (Mallory, Malcolm and Priscilla). His older sister, Jean Springer of Shelton, WA, also survives him.

John was raised in Norwood, MA and enlisted in the US Navy in 1946. After receiving an honorable discharge, he enrolled at Northeastern University, where he earned a BA in Chemical Engineering and a MA in Engineering Chemistry.

John worked as a co-op at Dennison Manufacturing while still a student, and then embarked on a 46-year-long career in the abrasives industry. He worked at Norton Company in Worcester before accepting a position as Research Engineer at Bay State Abrasives. He retired from Bay State as Manager of R&D after 38 years with the company. John holds several patents, and his technical articles have appeared in numerous publications.

John and his family moved to Upton in 1963, where he was active in community affairs for many decades, serving on the Finance Committee, School Committee and the Board of Selectmen. He also served on the Board of Library Trustees for 25 years, persevering over four failed attempts to construct an updated facility. He was last elected to the Board in 2021, and was a sitting member at the time of his death. In 2021, he and Cynthia went door-to-door, personally encouraging Upton voters to fund a new state-of-the-art library/community center. The motion passed, and the nearly-completed building is slated to open in spring of 2023.

He was a proud member of the American Legion Post #173, participating in numerous civic ceremonies over the years. A brick in honor of his service in WWII is installed in the Veterans Memorial Walkway at the George Lincoln Wood VFW Post 5594 on Milford Street, Upton.

John was one of Upton’s leading advocates for open-space protection. While on the Board of Selectmen, he actively supported the purchase of a large tract of land on Peppercorn Hill for conservation purposes. He summed up his position by observing that “When it’s gone, it’s gone.”

In 2021, John and his wife sold the development rights to their 40+ acres of woodland property to the Town, ensuring that it will be preserved in its natural state and remain accessible to future generations. Today, approximately one-third of Upton’s landscape is protected as open space.

While in his 40s, John decided to learn Russian, and became proficient in reading and speaking the language. He played the bagpipes, collected stamps and minerals, and lovingly cared for the gardens, fruit trees and animals on the farm he and his wife maintained. He also wrote several books, including two on Upton’s history. He had just completed a third book about his childhood during the Great Depression, the war years and young adulthood.

John Robertson was a man of faith. He frequently cited the importance of service and faith in speeches he gave at Town events.

A Memorial Service will be held on Saturday, January 28, at 11:00 A.M. in the United Parish, 1 Church St., Upton. Military Honors will follow.

Calling hours will precede the service from 9 to 11 A.M. at the church.

Donations in his memory can be made to:

The Friends of the Upton Library 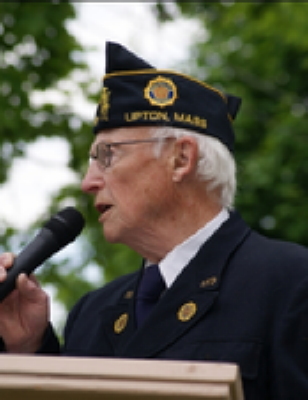